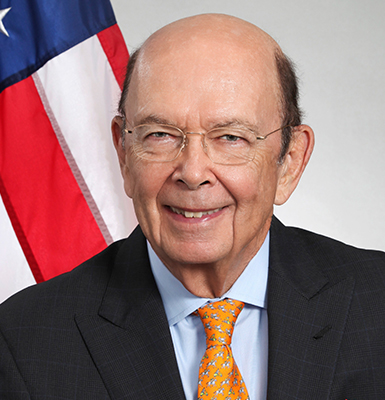 Wilbur L. Ross, Jr. was sworn in by Vice President Mike Pence as 39th Secretary of Commerce on February 28, 2017. Secretary Ross will be the principal voice of business in the Trump Administration, ensuring U.S. entrepreneurs and businesses have the tools they need to create jobs and economic opportunity.

Named by Bloomberg Markets as one of the 50 most influential people in global finance, Mr. Ross is the only person elected to both the Private Equity Hall of Fame and the Turnaround Management Hall of Fame. He previously served as privatization advisor to New York City Mayor Rudy Giuliani and was appointed by President Bill Clinton to the board of the U.S.-Russia Investment Fund. President Kim Dae-jung awarded Mr. Ross a medal for helping South Korea during its financial crisis and, in November 2014, the Emperor of Japan awarded him The Order of the Rising Sun, Gold and Silver Star.

As a philanthropist, Secretary Ross recently served as Chairman of the Japan Society, Trustee of the Brookings Institution and Chairman of its Economic Studies Council, the International Board of the Musée des Arts Décoratifs in Paris, the Blenheim Foundation, the Magritte Museum in Brussels, and the Palm Beach Civic Association. He was also an Advisory Board Member of Yale University School of Management. Secretary Ross is a graduate of Yale University and of Harvard Business School (with distinction). He and his wife Hilary Geary Ross have four children, Jessica Ross, Amanda Ross, Ted Geary, and Jack Geary.