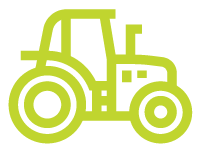 India is the world’s second-largest food producer but by some estimates, up to 45 percent of food produced is lost because of inefficient supply chains that result in food spoiling before it reaches consumers. This large share of food going to waste exacerbates the widespread malnutrition that impacts millions of people and four out of every 10 children in India. Food spoilage also limits farmer income: India’s Associated Chambers of Commerce estimates that post-harvest losses cost the country about $14 billion a year.

A loan to WayCool Foods is helping this four-year old company bring more produce to market in an efficient manner that avoids spoilage. WayCool is introducing technology, strict quality controls and efficient transportation to ensure that more produce reaches consumers. Working with tens of thousands of farmers across 15 states, WayCool weighs food before it leaves the farm, conducts quality checks in warehouses, and sends electronic payments to farmers, while transporting food to markets in temperature controlled vehicles. Farmers who work with WayCool report a 30 percent increase in income and the food they grow is sold in markets around the country and to multiple international restaurant and hotel chains. DFC’s $5.5 million loan will support the continued expansion of this “farm-to-fork” value chain.