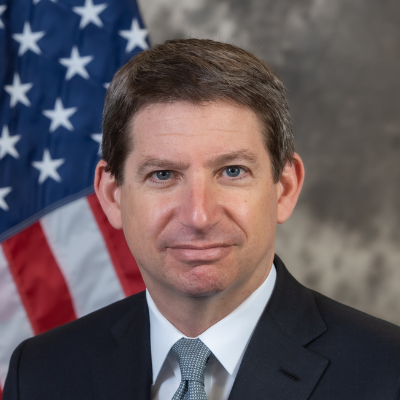 Scott Nathan serves as the Chief Executive Officer of the U.S. International Development Finance Corporation (DFC). He was appointed by the President, confirmed by the Senate on February 9th, 2022, and formally sworn in by the Vice President.

Mr. Nathan has had extensive experience across the public and private sectors. Most recently, he served as the Senior Advisor to the White House Office of Presidential Personnel after having worked on the Biden-Harris Presidential Transition’s Appointments team, where he oversaw appointments for the Office of Management and Budget (OMB), the Office of Personnel Management (OPM), and the General Services Administration (GSA).

He previously served during the Obama-Biden Administration as the Associate Director for General Government Programs at OMB. In that capacity, he led a team of OMB experts overseeing a range of policy, budget, and management issues impacting numerous cabinet departments and federal agencies. Mr. Nathan first entered public service as the Special Representative for Commercial and Business Affairs at the Department of State, where he led a team of foreign service officers and civil servants focused on protecting U.S. economic interests abroad and advocating on behalf of American exports. In that role, he traveled to more than 30 countries supporting the Administration’s economic diplomacy agenda.

Prior to public service, Mr. Nathan was for nearly two decades a partner, management committee member, and the Chief Risk Officer of The Baupost Group, a private investment partnership based in Boston. There, he gained extensive experience investing across asset classes and global markets while also leading some of the firm’s management and operational initiatives. He chaired Baupost’s portfolio risk committee, co-chaired its best practices and business risk committee, and ran investment team hiring. Mr. Nathan began his investing career focused on emerging markets, particularly public and private equity markets in Central and Eastern Europe.

He graduated from Harvard College and has a J.D. from Harvard Law School and an MBA from Harvard Business School. Additionally, he attended Emmanuel College, Cambridge University in England as the Lionel de Jersey Harvard Scholar.

Mr. Nathan lives with his family in Washington, D.C.