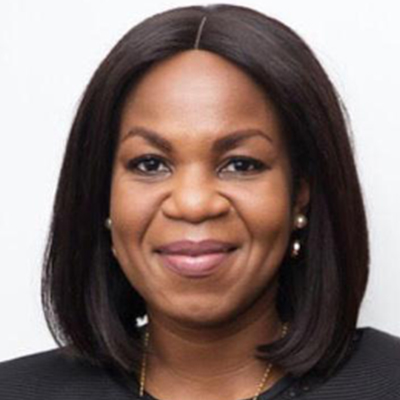 Before joining SEforALL, Damilola Ogunbiyi was the first female Managing Director of the Nigerian Rural Electrification Agency and responsible for successfully negotiating within 18 months the Nigerian Electrification Project, which is a $550M facility (World Bank $350M and AfDB $200M) to rapidly construct solar mini-grids and deploy solar home systems across Nigeria. She was also responsible for the Energizing Education Programme, which will provide uninterrupted electricity to 37 federal universities and seven teaching hospitals through off-grid captive power.

She also conceptualized the Energizing Economies Initiative, which provides sustainable and affordable off-grid power solutions to economic clusters, including markets and industrial clusters in Nigeria. When completed, 1.2 million SMEs will be connected to uninterrupted power supply. In addition, she drives gender inclusion activities in the REA and energy sector. Damilola previously worked as the Senior Special Assistant (SSA) to the President on Power and Head of the Advisory Power Team (APT) in the Office of the Vice President. She was responsible for the Power Sector Recovery Programme (PSRP), which is a series of policy actions and operational, governance, and financial interventions to be implemented by the Federal Government of Nigeria (FGN) over a five-year period (2017-2021).

Before joining the Federal Government of Nigeria (FGN), Mrs. Ogunbiyi was the first female to be appointed as the General Manager of the Lagos State Electricity Board, which is responsible for public lighting, independent power projects and energy development in Lagos State. Under her leadership, five independent power projects were completed to deliver over 55 MW of power to Lagos State hospitals, schools, streetlights, and the Government secretariat. In renewable energy, she completed a 5 MW decentralized solar project for 213 schools and clinics in Lagos State.

Mrs. Ogunbiyi entered public service as the Senior Special Assistant to the Lagos State Governor on Public-Private Partnerships (PPP). Prior to her appointment, she was a consultant for the United Kingdom Department for International Development (DfID) on public-private partnerships.

Mrs. Ogunbiyi maintains a keen interest in mentoring and empowering young people through skills acquisitions. She created the Lagos State Energy Academy to build the capacity of young people in renewable energy technology.

Mrs. Ogunbiyi is one of the Commissioners for the Global Commission to End Energy Poverty, which is an initiative driven by the Massachusetts Institute of Technology (MIT) and The Rockefeller Foundation.