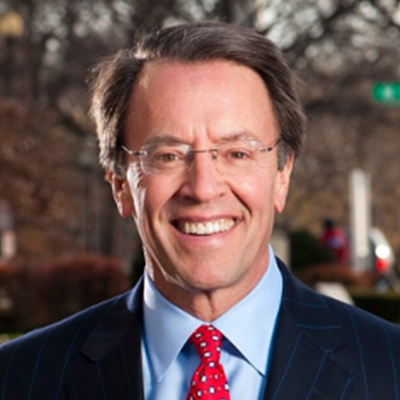 Mr. Mosbacher was sworn in as the ninth President and Chief Executive Officer of the Overseas Private Investment Corporation (OPIC), DFC’s predecessor agency, in October of 2005, following confirmation by the United States Senate. He stepped down from his position at OPIC in January of 2009.

Robert Mosbacher, Jr., is founder, Chairman, and CEO of BizCorps, a Washington-based nonprofit organization that places graduates of top American business schools with SME entrepreneurs in emerging markets. These graduates work with the entrepreneurs to develop business plans and other strategies for growth. BizCorps is currently operating in Colombia.

Mr. Mosbacher was Chairman of the Board of the Greater Houston Partnership in 2004, a private, nonprofit organization that serves as the city’s chamber of commerce.

Mr. Mosbacher has also served as Chairman of the Board of the Methodist Hospital, the Salvation Army, and the Greater Houston Area Chapter of the American Red Cross, all in Houston. He is founder and former co-Chairman of Rebuilding Together Houston (formerly PSI HomeSavers), which organizes volunteers to deliver free exterior home repairs and has resulted in the repair of over 6,000 houses for qualified low-income elderly or disabled Houstonians. He also served on the Board of South Texas College of Law.

Mr. Mosbacher received a law degree in 1977 from Southern Methodist University and a Bachelor of Arts degree from Georgetown University in 1973.